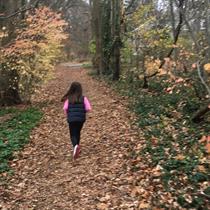 Welcome to My Page

Thank you for visiting my page. SOS Children's Villages is very dear to me, and I'll appreciate all the support I can get.

Every day is an opportunity to accept a challenge, to be a warrior and to make a difference and together we can make sure every child has a loving home!

I have been invited to join a Born GUERRERA run streak starting November 22, 2015, and ending on January 21, 2016, to benefit the SOS Children’s village in Santiago, Dominican Republic!

I will be running a charitable run streak for 60 consecutive days. What is a run streak? Run everyday, at least one mile per day, for a set amount of time. Who wants to join me for a fun run?

Do I Track My Mileage Too? Yes! Our goal is to run a combined total of 1509 miles in the next 60 days. I'll be flooding your feed with posts of the run streak progress on Facebook, Twitter & Instagram.

Why 1,509 Miles? There are approximately 1,509 miles between NYC and the S.O.S. Children’s Village in Santiago, Dominican Republic. Tracking miles is great way to stay motivated and a bonus challenge you can tell your supporters about.

THE CAUSE: What is S.O.S. Children’s Villages?
The largest organization dedicated to building families and caring for orphaned, abandoned and other vulnerable children in 134 countries and territories, including the United States. Founded in 1949, S.O.S. Children’s Villages provides family strengthening programs, education, health services, and emergency response in situation of war and disaster. (sos-childrensvillages.org).

Why the Dominican Republic?
“The combination of widespread, structural poverty and a comparatively high HIV rate particularly affect the country's most vulnerable segment of population: Dominican children. More than one million children in the Dominican Republic live in poverty and roughly 578,000 children under the age of 15 are without parental care. Around 20 per cent of them are orphans. (sos-childrensvillages.org/where-we-help/americas/dominican-republic). While tourism in the Dominican Republic has recently accounted for an important source of income, it has also been associated with substantial problems the country is facing, the most apparent being commercial sexual exploitation of children. (Id.) Large numbers of Dominican children are subjected to sex trafficking throughout the Dominican Republic, the Caribbean, Europe, South and Central America, the Middle East, Asia, and the United States. Commercial sexual exploitation of local children by foreign tourists and locals persists, particularly in coastal resort areas of the Dominican Republic. NGO research indicates sex trafficking of 15- to 17-year-old girls occurs in the street, parks, and on beaches. (U.S. Department of State, 2015 Trafficking in Persons Report state.gov/j/tip/rls/tiprpt).